Each of the thee engine options on the 2015 Ford Transit is paired with a smooth and responsive 6-speed transmission.

The 2015 Ford Transit comes standard with a 3.7-L V6 engine, but a turbocharged 3.5-L V6 and a 3.2-L diesel in-line five-cylinder engine are also available depending on individual needs.

Multiple additional packages are available on the base model of the the 2015 Ford Transit, including the addition of the MyFord Touch infotainment system.

Safety and convenience features like a rearview camera, rear parking sensors and a lane-keeping warning system are optional on the 2015 Ford Transit.

The regular-length wheelbase 2015 Ford Transit outfitted with the 3.7-L V6 or the 3.5-L turbocharged engine has a combined city and highway mileage of 16 mpg.

In the world of commercial vans, the 2015 Ford Transit Atlanta GA is redefining what it means to wed practicality, comfort and technology. New to the 2015 model year, the Ford Transit is available with a standard or long wheelbase, a low, medium or high roof height, or even an extended-length body paired with the long wheelbase chassis. In the high roof base there is room for people to stand up straight even in the six-foot height range.

Even the smallest model of the 2015 Ford Transit has a maximum cargo capacity of 247 cubic feet, while the midsize roof model offers 315 cubic feet, and the tall roof with the expanded wheel base offers a whooping 487 cubic feet, which includes having space for items up to 14 feet long. In addition to a maximum payload of 4,650 pounds, some configurations of the 2015 Ford Transit can also tow up to 7,000 pounds when properly equipped. That means that this van can handle whatever commercial demands are thrown at it. 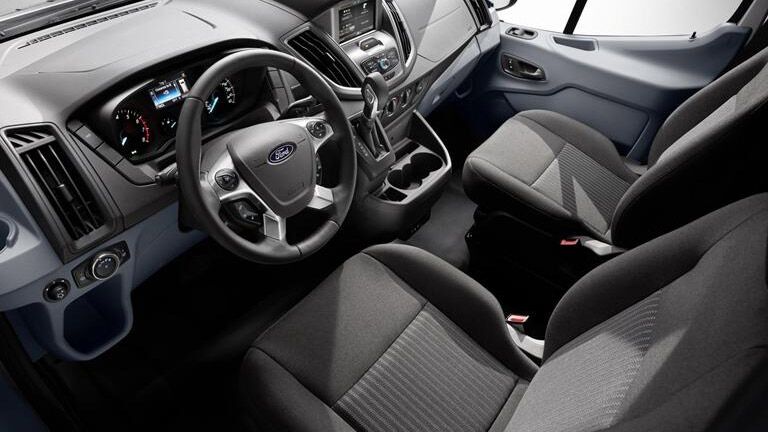 Technology and interior of the 2015 Ford Transit

Inside the cabin and not just in the cargo hold, the 2015 Ford Transit is, again, stepping up its game compared to previous models. Coming standard with front air-conditioning, cargo-area tie-downs and an audio system with an auxiliary input jack, the Transit offers a variety of upgrade options a well, most of which can be ordered individually or as part of packages. Long-arm mirrors, dual sliding rear cargo doors, cruise control, remote engine start, Crew Chief telematics, the Ford Sync system with a four-inch screen or the MyFord Touch infotainment system with a six-inch touchscreen and navigation are all available.

The 2015 Ford Transit isn't a beautiful vehicle, but it's not meant to be. Instead, its ability to haul whatever is needed at good speeds has to take priority, and in so many way the new Transit is breaking new ground compared both to the past E-series models it is replacing as well as its competitors. The cabin has been completely refined and almost gives the impression of driving a family crossover SUV rather than a van with smooth, easy handling. It also has a smaller turn radius for those tight maneuverability moments. For more information on the 2015 Ford Transit in Atlanta GA fill out the form on this page today.