Now that it has been the best-selling sports coupe in the entire world for three years in a row, people might think Ford will take some time to rest on its laurels when it comes to its new Mustang lineup. But anyone who might think that doesn’t know Ford and how much they love updating, upgrading, enhancing and improving the new Mustang lineup each and every model year. And the 2019 model year is no different. That’s because the all-new 2019 Mustang lineup will feature two all-new models – the 2019 Ford Mustang Bullitt and the 2019 Ford Mustang California Special – to go along with an all-new segment-exclusive quad-tip fully variable active valve performance exhaust. Featured on all 2019 Mustangs that also feature an EcoBoost engine, this new active valve performance exhaust system is something truly special. To see what we mean, let’s take a close look at the new performance exhaust features of the 2019 Ford Mustang lineup.

Those who’ve had the privilege of going for the ride of their life in a 2018 Ford Mustang GT have gotten a taste of what a segment-exclusive quad-tip fully variable active valve performance exhaust can do when paired with a new Ford Mustang at Akins Ford near Atlanta, GA. But now, that experience will be even better, and it will now be available on more new Mustang models than ever before. 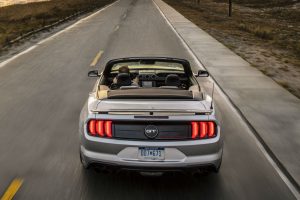 To learn more about the 2019 Ford Mustang lineup or any of our other new Ford cars, trucks and SUVs, please contact our Akins Ford staff near Atlanta, GA.

What V8 Engine is Under the Hood of the All-New 2019 Ford Mustang at Akins Ford near Atlanta GA?

This entry was posted on Wednesday, June 20th, 2018 at 8:00 am and is filed under Ford Mustang, Powertrain. You can follow any responses to this entry through the RSS 2.0 feed. Both comments and pings are currently closed.